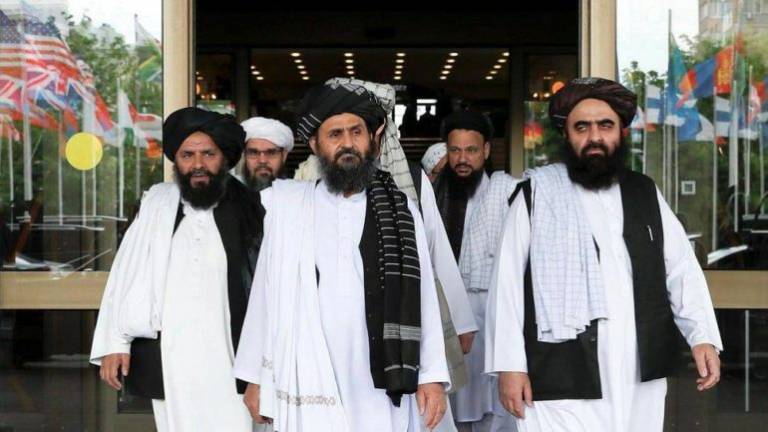 Peace talks on halt as Taliban focus on regional visits

The Taliban appear to have focused in garnering a regional support to their cause. The group’s top delegation is on frequent visits of Afghanistan neighboring countries while the second round of the intra-Afghan negotiations is on hold in Doha, capital of Qatar. Overwhelmed by what negotiators of the Islamic Republic of Afghanistan described as the group’s “reluctance” to negotiate, Afghan officials are now blaming the militant group of postponing the talks, making irrational reasons and excuses.

2/2 During this visit, the issues concerning Afghanistan and Turkmenistan, commercial relations, political advancement and other related issues will be discussed and views will be exchanged about it.

Following months-long debates, the peace delegation led by the Islamic Republic of Afghanistan and the Taliban representatives agreed to principles and procedures of the intra-Afghan negotiations earlier in December 2020. After the agreement, the two sides went on a 21-day break going back to their respective leaderships in Afghanistan and Pakistan to receive further consultations on the agendas to be discussed in the next phase of talks. The Afghan negotiation team left Kabul for Doha to attend the second round of intra-Afghan talks on January 05. The Taliban, however, stayed for a longer time in Pakistan and returned to Doha late. Two weeks ago, government negotiators told Kabul Now that the Taliban negotiators are reluctant to negotiate after their visit to Pakistan. They further speculated that perhaps the group has received new consultations from Pakistan and have new demands from the United States. On January 26, Nader Nadery, spokesperson of the government negotiation team, confirmed that no formal meeting was held since January 17 and the Taliban side is not willing to engage in talks.

Still no meeting has been reported between the two sides since then as the Taliban top delegations are shuttling between capitals of the neighboring nations. Weeks ago, a top Taliban delegation led by Baradar paid a visit to Iran and met top Iranian officials, including Iran’s foreign minister, Javad Zarif. Simultaneously, another Taliban delegation led by Sher Mohammad Abbas Stanekzai went to Russia and met Russian officials.

Chief of the High Council for National Reconciliation (HCNR), Abdul Abdullah, in response to Taliban’s unwillingness to discuss a peace settlement, accused the militant group of making “irrational” excuses and postponing the peace negotiations. The Taliban are busy with making travels and engaging in marginal issues, instead of negotiating the main issues, how to end the war, violence, killing Muslims, and decreasing the people’s sufferings, Abdullah was cited as saying in a statement issued by the HCNR office on Friday, February 05. He further went on to reject the Taliban’s accusation that the negotiations team of the government lacked the required authority to negotiate issues with the Taliban.

A key and yet controversial issue raised after the negotiating sides finalized the procedures and Terms of Reference (TOR) in Doha, is speculations about creating an interim administration. In addition to some political opponents of President Ghani, at least two members of the government-led negotiations team have so far clearly implied that establishment of such an administration is inevitable with one of them even argued that it worth someone to be removed from the power.

Making remarks about formation of an interim-government, Yunus Qanuni, an arch foe to the Taliban and also a prominent opponent to President Ghani, said in a gathering held in Kabul on Thursday, February 04, that the Taliban need to agree to a “range of fundamental values” before forming an interim government. He further went on to describe these values as the political system, how to elect its leadership, citizen rights, the Constitution, and the fate of the Taliban fighters. He also reiterated that an acceptable political system for the Afghan people should consider ethnic, political, and gender diversity, and achievements made over past two decades.

If the peace talks with the Taliban did not yield result, Qanuni said, then the war would be imminent. In response to this situation, as the longtime Taliban foe put it, the Jihadist forces – a point out to militias of Mujahideen fought the Taliban in 1990s – and the young generation of Afghanistan will fill in the vacuum of the foreign troops.

Before Qanuni’s remarks, the Taliban’s prominent negotiator, Abbas Stanekzai, said in an online press conference in Moscow, Russia’s capital, that the group is ready to work with a new government if Ghani resigns. He further went on to accuse Ghani of lobbying in the United States and in Europe to have himself as ‘President of the next government’ while not giving the required authority for the government’s negotiation team in Doha.

On the other hand, the Parliament Speaker, Mir Rahman Rahmani, created a peace committee of MPs last week and extended support for what he described as an agreed plan on establishing an interim government between the Taliban and the United States. This was, however, followed by huge criticisms of pro-government MPs and the government officials.

Is Biden administration strict on Taliban?

Soon after being elected as the US President, Joe Biden picks for the US Department of State and the country’s National Security Council implied in their remarks a strict position in regard with the peace deal with the Taliban. The Biden administration has so far made it clear that it will review the US-Taliban Peace deal signed on February 29, 2020, and the country’s troop withdrawal from Afghanistan.

The Afghan government welcomed the decision by the Biden administration but the Taliban reacted to it, warning that the group will attack US troops if they do not withdraw from Afghanistan.

Great meeting with @US4AfghanPeace Ambassador Khalilzad to discuss the way forward in Afghanistan: continuing to protect the U.S. against the threat of terrorism, achieving a just and durable political settlement there, and cementing a permanent and comprehensive ceasefire. pic.twitter.com/qJ3H4erZ4v

Efforts in the US is underway to bring an end to nearly 20 years of war in Afghanistan. The US Secretary of State Antony Blinken met with the US Special Representative for Afghanistan, Zalmay Khalilzad to discuss the Afghan peace process. “Continuing to protect the U.S. against the threat of terrorism, achieving a just and durable political settlement there, and cementing a permanent and comprehensive ceasefire,” Blinken detailed about the issues they both discussed in the meeting.