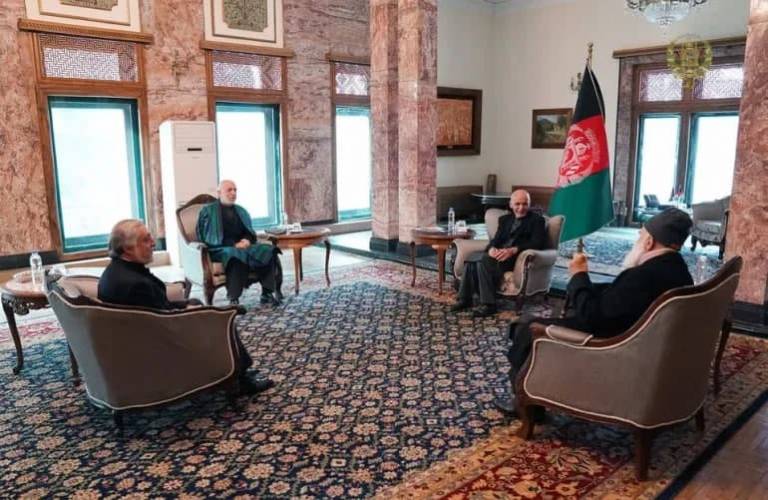 Pres. Ghani speeds up efforts to form HCNR after calls by international partners

After strong calls made by major international partners, including the European Union and United States, for a “swift establishment” of the High Council for National Reconciliation (HCNR), President Ghani has accelerated efforts to form the HCNR and convene its first meeting. This comes as negotiating teams of the government and the Taliban make conflicting accounts regarding finalization of procedure for intra-Afghan negotiations.

During the meeting, they discussed the peace process, how to structure the High Council, and convene its first general meeting, the Presidential Palace said in a statement.

The meetings focused on formation of the HCNR comes after a call by Afghanistan international partners for “swift establishment and operationalization” of the High Council and amid conflicting accounts expressed by negotiating sides regarding finalization of principles and procedure for intra-Afghan negotiations in Doha, capital of Qatar.

Media reported almost a week earlier that the two sides have agreed in principles and finalized a procedure for negotiations but the agreement needed to be endorsed by President Ghani in Kabul and the Taliban leader before announcing it officially. Later, a government source, however, told Kabul Now that President Ghani was frustrated by the agreement and had recalled head of the government negotiation team, Masoom Stanekzai, and Salam Rahimi, another key negotiator, to Kabul.

After the reports, EU Delegation and EU Heads of Mission issued a joint statement calling for swift establishment and operationalization of the HCNR to provide guidance to the intra-Afghan negotiations underway in Doha. “In addition to political leaders, the membership of the Council should include a diverse membership representing women’s groups, war victims, religious minorities, youth, and civil society organizations,” part of the statement says about formation of the HCNR.

Expressing concern about the continuing high level of violence, they also called for an “immediate, permanent, and comprehensive ceasefire” in Afghanistan.

The statement was then endorsed and supported by some other major international partners of the Afghan government, inter alia by the US Chargé d’Affaires to Afghanistan, Ross Wilson, and the UK Embassy in Afghanistan.

“I fully endorse the European Union’s statement on the importance of convening the High Council for National Reconciliation and call for a cease-fire and sustainable peace,” said Ross Wilson in a tweet.

I fully endorse the European Union's statement on the importance of convening the High Council for National Reconciliation and call for a cease-fire and sustainable peace. The High Council will provide critical guidance to the negotiations and next steps toward peace. https://t.co/YpdBKuRdfe

Though the government and Taliban negotiating teams remained tight lipped regarding the reported agreement for many days, they confirmed late yesterday, November 28, that the two sides have agreed in principles to the 21 articles. But they made conflicting accounts regarding the “introduction” part of the agreement and its finalization.

For the government negotiation team, as they stated in their announcement, the introduction part needed further discussion and clarifications and the procedure was not finalized. “The negotiation teams of both sides have ONLY agreed in principle to the 21 articles of the rules & procedures, with the exception of the introduction because it requires further discussion & clarification. Therefore in the joint meeting on Nov 17, 2020 in the presence of the host country, it was decided that the rules & procedures will only be considered final once it is presented to the general meeting of both delegations & approved there,” the statement said.

For the Taliban negotiating team, the entire procedure, including its introduction part, was finalized. “The entire procedure including the preface was completed and finalized by the agreement of both negotiating sides on the dates mentioned in the previous tweet,” wrote Mohammad Naeem, spokesperson for the Political Office of the Taliban in Doha, on twitter after the statement issued by the government negotiation team.

Given the government’s inflexibility to endorse the achieved agreement in principles, the strong call of its international partners for establishing the HCNR, and subsequent meetings of President Ghani with prominent political figures, formation of the High Council seems to have changed into a top priority for the government leadership. Moreover, once established and operationalized, the HCNR under the leadership of Abdullah – who had, unlike Ghani, welcomed the breakthrough between the negotiating teams – is expected to remain more flexible and speed up the intra-Afghan talks.