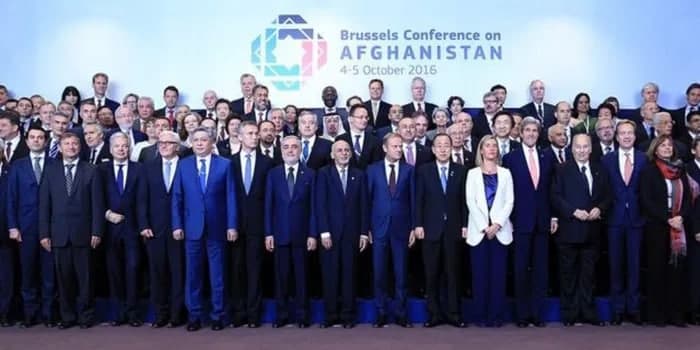 While donor countries and organizations are set to make further commitments in the upcoming Afghanistan 2020 Conference that will take place on 23-24 November in Geneva, the Afghan government is under fire for not delivering upon its promises in the fight against corruption, doing little for access to information, and making “paper reforms.” As per account of the oversight agencies, the government’s failure to effectively curb the corruption and fulfill its commitment made in 2018 Geneva Conference on Afghanistan may negatively impact the international assistance for Afghanistan in the upcoming Geneva conference.

As stipulated in the Geneva Mutual Accountability Framework (GMAF) agreed in 2018 Geneva Conference, the government has committed to implement the following deliverables for the fight against corruption: approves new indicators for the 2017 “Anti-Corruption Strategy”, track, report, and increase year on year cases of corruption, asset declaration of the government officials, and implement the Access to Information Law.

As set in the first deliverable for anti-corruption efforts, the government is missioned to formally approve new indicators for the anti-corruption strategy and a concrete and time-bound action plan by June 2019. Approval of the indicators and the action plan is aimed to improve prosecution detailing case-flow, timelines, and clear functions and responsibilities of the Attorney General’s Office (AGO), Ministry of Justice (MoJ), Ministry of the Interior (MoI), Supreme Court, Anti-Corruption Justice Centre (ACJC) and the Anti-Corruption Commission (ACC).

Though the ACC should have established with clear functions and responsibilities by June 2019, President Ghani formed the Commission on November 12, 2020. It was followed by huge criticisms of civil society activists, the media, and oversight bodies. Sayed Ikram Afzali, Executive Director of the Integrity Watch Afghanistan (IWA) – a national oversight body – says that the Commission’s formation before Afghanistan 2020 Geneva Conference was just an “illegal, symbolic, and political” action.

According to him, members of the Commission were selected illegally in absence of the civil society’s representative. He further went on to claim that the government officials, specifically Chairman of the Independent Administrative Reform and Civil Service Commission (IARCSC), have interfered in the selection process and expelled representative of the civil society organizations from the selection committee.

“We opposed [their] interference in the [selection] process. A number of independent and competent candidates were dropped out of the list. They prevented forming a strong commission,” Afzali said, adding that the government did so illegally while they are not legally allowed to remove an elected representative and forge their friends or government officials in the selection committee.

The IARCSC, however, rejects Afzali’s claims, saying that members of the ACC have been selected in the presence of representatives of the civil society organizations. “The proposed candidates have been selected based on their specialized experience in areas of combatting corruption, management and leadership experience, and personal characteristics,” said Abdul Farid Ahmad, spokesman for the IARCSC.

As per account of Afzali, the government has also committed delinquency and negligence in setting new indicators for the anti-corruption strategy and action plan. The new strategy was developed hurriedly in last minutes without reviewing the previous strategy. He argues that the newly developed anti-corruption strategy lacks some key indicators like problem analysis, strategic functionality, and the required goals to resolve the issues. “Therefore, it seems not helpful to combat the corruption.”

Tracking and prosecution of corruption cases

As stipulated in the second short-term deliverable for fighting corruption, the AGO’s Anti-Corruption Unites have to effectively and efficiently track, report and increase prosecution of corruption cases year on year. To measure the progress and set targets, the government is obliged to provide accurate data for the biannual meetings of senior official meetings in 2019.

Meanwhile, the government has often been accused of turning a blind eye on cases of heavy corruption or taking a political approach towards prosecution of these cases. Late on August, Afghanistan’s Ombudsperson Office introduced a number of the incumbent and former ministers, deputy ministers, governors, and other high level government officials to AGO on charge of corruption or embezzlements. Some critics and those officials, who were charged, described the government’s move as a political and symbolic action to showcase that it has made ‘achievements’ in the fight against corruption for the upcoming Geneva conference.

According to the quarterly report, as of May 20202 the Office of the Asset Declarations of AOP registered 95% of the assets of the government officials, verified 1.2% of the declared assets, and 60% of the declared assets is under verification. It details that the Office enforced 651 sanctions against officials who did not declare their assets which encouraged 534 officials to declare their assets afterward.

The figures provided in the quarterly report seems to change in the final report of the government, which is not finalized, to the donors.

Afzali, director of the IWA, meanwhile, the government has not reported any violation or offenses in the process of the assets declaration which indicates lack of scrutiny and investigation in the process.

To promote access to information, the government has committed for its donors in 2018 Geneva conference that Oversight Commission implements policies and procedures for tracking requests quality and timeliness of responses, maintaining statistics, and providing public quarterly updates; and delivers awareness programs in 15 provinces in 2020.

As detailed in the quarterly report of the government, the Access to Information Commission (AIC) of Afghanistan has has developed a total of 8 procedures for access to information, registered 410 requests for information all of which were responded to in a timely manner, received 57 complaints out of which 36 complaints were addressed, and 21 complaint cases are under process. AIC has also delivered a total of 48 awareness programs to 3,795 participants (1,079 women; 2,716 men) in Kabul.

Though the oversight bodies and media activists welcome the Access to Information Law, the Access to Information Commission, and allocated resources for it, they criticize that the Commission’s performance alleging that the Law has not been implemented. The Law, Commission, regulations and procedures, and the President’s five decrees issued for facilitating access to information are major achievements but they have not led to facilitation of access to information, says Mujib Khelwatgar, Executive Director of NAI – Supporting Open Media in Afghanistan.

According to Khelwatgar, very few of dozens complaints filed by NAI has been addressed. He further maintained that the laws, regulations, and president’s decrees have no executive guarantees and the government has not done enough to promote the culture of access to information. As per his account, the punishments, particularly pay cuts and warnings made by the Access to Information Commission, has not been implemented. Though some agencies have shown good performance in sharing information with the public and the media, some strongmen who enjoy political support have not been kept accountable as required by the Law.

The government has often blamed for not having the will to fulfill its commitments and this said to be the key factor behind its failures. In addition to the government’s unwillingness, Afzali believes that the international community’s inability to set productive conditions and ask for achievable missions from the Afghan government has also contributed to the failures. Though Afzali, as he said, has urged for inclusion of representative of the Afghan civil society organizations in upcoming mutual accountability framework, the international community has not accepted.

In its quarterly report, the government has evaluated its GMAF progress in areas of anti-corruption, governance, rule of law, and human rights by 77 percent until May 2020.

According to the Ministry of Finance (MoF), the government has so far made a progress of 84 percent regarding the overall commitments made in the 2018 Geneva conference. The final report on the government’s accomplished commitments was still under work and not finalized, the MoF Spokesperson told Kabul Now.

As per account of Afzali, the government has just written on the paper report that it has made nearly 90 percent progress while nothing has been achieved. He further expressed concern that failures of the government in fulfilling its commitments would discourage the international community to continue its financial support for Afghanistan.

In a letter sent to US officials,  the US Special Inspector General for Afghanistan Reconstruction (SIGAR), John F. Sopko, denoted that the Afghan government “often makes paper reforms such as drafting regulations or holding meetings, rather than concrete actions that would reduce corruption, such as arresting powerful actors.” According to SIGAR, the Afghan government take meaningful action when donors are engaged and call for reforms to curb systemic corruption.