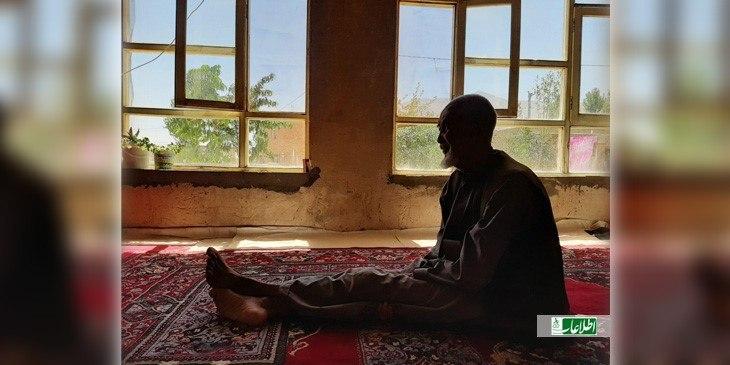 Khadim Hussain at his house in Kabul
KabulNow·August 9, 2020

“They brought four dead bodies in a single day to Qala-e-Shahada mosque. One of them was my son, Sharif,” Khadim Hussain retells the devastating scene he saw eight years back. His one and only son, Sharif, who was member of the Afghan National Police, was killed in war against the Taliban in the southern Ghazni province.

As the only son and bread winner of his family, Mohammad Sharif was the only beacon of hope for his family and aging parents. His death changed almost everything in the family and left his traumatized old parents with a shock wave that still appears on Hussain’s face as he recalls the saddest story of his life.

Khadim Hussain, who looks in his 80s, is living along with his wife, who is seemingly in her 60s, and his 18 years old daughter in Abdullah Ansari area, a remote slum in western neighborhood of Kabul.

With Sharif’s death, this family of three lost their one and only income source. To feed his family, Khadim Hussain is running a petty stall of second hand cloth. With a stick in his hand, he is desperately waiting for a customer to buy his hanged worn second hand cloth on a mud-wall in an isolated remote area.

Fighting for eight years in fight against the Taliban insurgency, Sharif lost his life in a war with the very insurgent group that is now reappearing to share power with the Afghan government.

The nearly-20-year war has left a heavy burden on the nation’s shoulder. The Hussain family is one of the countless families who has been carrying the burden and wound this war has left in heart of every war victim family.

For Khadim Hussain everyday life is a real ordeal. He can hardly provide few breads for his family. “I take these used cloths from a used clothing store near to this area and hang them on the wall in front of the mosque. I can sell one pair or two some days and buy breads for my family,” says Khadim Hussain.

Government unable to pay allowance for “all martyrs”

Safura, Sharif’s sister, was 10 years old when she lost her brother. She remembers very little about her brother.  “Sharif was a police soldier in Khost than he was posted to Ghazni where he was killed,” she said.

The only reminisce remains from Sharif’s career is a picture showing him in police uniform.

Sharif’s parents are legally entitled to be paid their son’s allowance until they are alive but they have not received any allowance for the last six years. According to the Hussain family, they have only received 100,000 afghanis over the course of two years after his death. Safura said that the State Ministry for Martyrs and Disabled Affairs collected all documents of Sharif, saying that the government was not able to pay allowance for disabled soldiers. “We received Sharif’s allowance just for two years after his death. The State Ministry for Martyrs and Disabled Affairs said that the number of army martyrs are too much and the government is no longer able to pay allowance for all the martyrs,” Safura stated. “They collected Sharif’s documents and stopped paying Sharif’s allowance.”

Despite repeated requests by Kabul Now, authorities at the State Ministry for Martyrs and Disabled Affairs refused to comment regarding this case.

The Hussain family, though entitled to receive relief package, has received two naans on daily basis for few mouths.

With the outbreak of Covid-19 in Afghanistan and subsequent lockdown in major cities, the government initiated some aid delivery programs, inter alia a nationwide bread distribution for the people in need which worth around one billion and 150 million (1,150,000,000) afghanis. It was launched after the government received around two billion US assistance to cope with economic implications of the pandemic in the country.

But the Covid-19 relief program was stopped days ago as the government lifted up lockdown and movement restrictions placed in Kabul city.

“When there was news of any relief program, I would go to the area’s councilor, tell him [about my status] and ask for help but he would ignore. He, himself, would store gunnies of wheat flour in his house. What should we do when he hesitates to give us the aid?” the father of the fallen soldier complains.

This story has been developed by Etilaat-e-Roz’s Luft Ali in Dari and translated into English by Mokhtar Yasa.