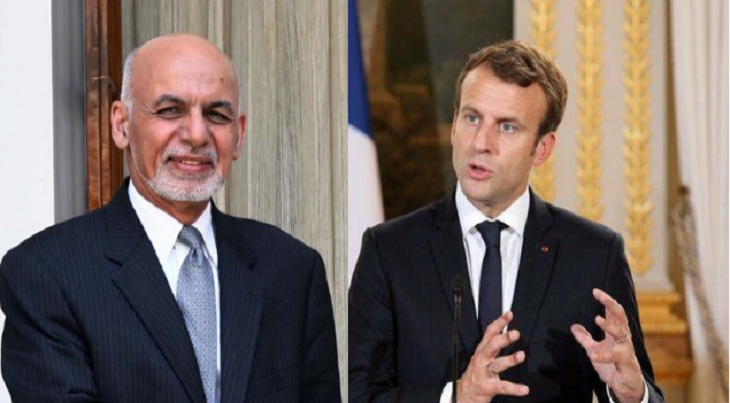 The conversation comes at a time when the Afghan government is preparing to hold a power sharing deal with the Taliban insurgents. Under US-Taliban peace deal, signed in February, the Afghan government and Taliban were to exchange prisoners to pave path for commencement of the intra-Afghan talks which were expected to be held on August 16 in Doha. However, it was impeded after the government refused to release 32o high profile Taliban prisoners, demanding the group to first set free 22 Afghan commandos who are held in Taliban custody.

Early in mid-August, the French government pressed its Afghan counterpart not to release those Taliban prisoners found guilty of killing French nationals in Afghanistan. Australia, too, urged Afghanistan not to proceed with releasing of Taliban prisoners who were behind murder of Australian citizens.

The government of France has actively been engaged in Afghanistan’s health schemes—the French Medical Institute for Mothers and Children in Kabul—and archeological reconstruction project in the country over last 19 years.

President Macron stressed that the Afghan government has fulfilled its commitments for peace, and it is now on the Taliban to do their part for peace, according to the statement.

Earlier on August 27, the acting foreign minister of Afghanistan, Hanif Atmar, in an interview with the United States Institute of Peace (USIP), said with release of 400 Taliban detainees, the total number of the released Taliban prisoners will reach 5,600. He urged the Taliban leaders to remain committed to bringing peace and do not let the freed Taliban prisoners return to battlefield.

On the other hand, the chairman of High Council for National Reconciliation, Abdullah Abdullah, on Thursday, August 27, while speaking at inauguration ceremony of a peace survey in Kabul, expressed optimism for peace, saying that the intra-Afghan talks are likely to be held in coming weeks.

The long-delayed Afghan peace process was scheduled to take place on March 10 in Doha but it was delayed over differences between the two parties—mainly differences over prisoner exchange.

The government says it will release the remaining 320 Taliban prisoners conditioned on the Taliban set free 22 Afghan commandos.