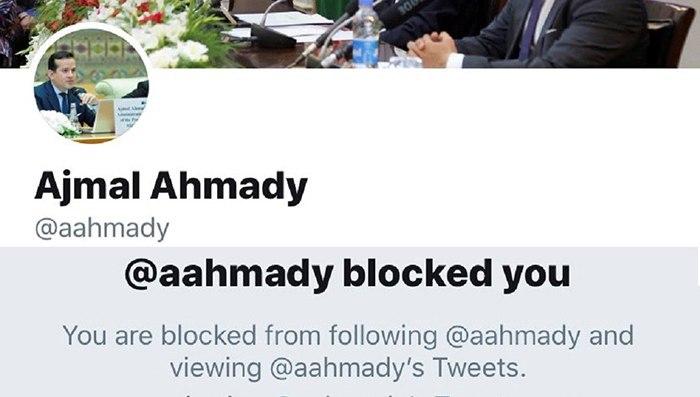 Ahmady started to block reporters after they shared an investigative report by Kabul Now and Etilaatroz asking him for clarifications about a contract he had signed with the Ministry of Finance (MoF) as “Consultant” while holding the position of Senior Adviser to the President in Banking and Financial Affairs.

The report revealed that Ahmady received USD 500 on daily basis for a 12-month consultancy service contract he signed with the MoF. According to the contract, in addition to the daily-paid wage, Ahmady has received a total of USD 21,400 as accommodation (10,800 USD/yearly), mobile top up (600 USD/Yearly), and round trip (10,000 USD/yearly) costs from the MoF for the unclear services he has provided during the term.

“Freedom of the press is democracy’s guardian; Afghans should be proud of their journalists, not blocking them,” US Chargé d’Affaires to Afghanistan Ross Wilson said in a tweet signed as KD. He added that the US stand with those who hold government and its leaders accountable.

Transparency is the foundation of democratic government. Freedom of the press is democracy’s guardian; Afghans should be proud of their journalists, not blocking them. We stand with those who hold government institutions and their leaders accountable. -KD

Retweeting Wilson’s tweet, German envoy on Afghanistan, Potzel Marks, expressed agreement with Ambassador Wilson, noting that freedom of the press has been one of the most valuable achievements in Afghanistan over past two decades and must not be jeopardized.

Prominent journalists of Afghanistan questioned Ahmady’s behavior after they were blocked on Twitter.

After wide circulation of Kabul Now’s report on his contract scandal with the MoF, Ajmal Ahmady began to block journalists who shared the story on Twitter. His behavior was widely criticized as violation of freedom of the press.

“He is a Harvard graduate and can hardly speak Persian. He has received USD 500 on daily basis for providing consultancy to the finance ministry and is now Afghanistan’s central bank governor,” Mukhtar Wafayee said on Twitter, adding that he was blocked after sharing part of the investigative report. “He is dear to President Ghani and no one can dare to ask him what service he had offered in return for the USD 500.”

Bureau Chief of Radio Azadi, Sami Mahdi, was blocked after he asked Ahmady to share an already leaked and controversial video of Ghaffar Dawi’s visit to his office in the central bank. Retweeting Ross Wilson’s comment, he went further to criticize the leadership of the Afghan government for not reacting timely to the central bank’s governor’s action.

Mr. Ajmal Ahmadi @aahmady has blocked me because I asked him to give out the cctv video of Ghafar Dawi's alleged "uninvited" visit to his office in the Central Bank.
Transparent Governance pic.twitter.com/XaYiXwqKiw

Calling US Chargé d’Affaires’s reaction as timely, Zaki Daryabi, editor-and-chief and publisher of the Daily Etilaat-e-Roz, highlighted that the acting central bank governor, during his service as Senior Adviser to the President from 2014-2019, has committed tax evasion, not mentioning his full income in asset registration form. Daryabi called on the US Special Inspector General for Afghanistan Reconstruction to probe the case.

It would have been much better if the Presidential Palace and officials of the Afghan government had reacted instead of US Embassy, Daryabi noted.

On the other hand some social media users and journalists compared huge payments of the government officials, particularly that of Ahmady, to soldiers, teachers, and other low-paid government employees. They called it as “looting” of the public assets.

“This official must be reprimanded”

A number of organizations supporting media and freedom of press reiterate that government officials must be accountable and responsive for questions and public criticisms. Ahmady’s reluctance to respond, indeed, indicates that he is either involved in a crime or conceals it.

Aynuddin Bahaduri, Chairman of the Access to Information Commission, says that the acting bank governor is responsible to provide clarifications on his consultancy contract with the ministry of finance. “Mr. Ahmady must prove whether Etilaatroz’s claim is authentic or not,” he noted.

Advocacy manager at Afghanistan Journalists Safety Committee, Sediqullah Tawhidi, says government officials are duty-bound to remain accountable. “If governor of the central bank is not ready to answer journalists’ questions, it is, indeed, a clear violation of the Law on Access to Information and this government official must be reprimanded.”