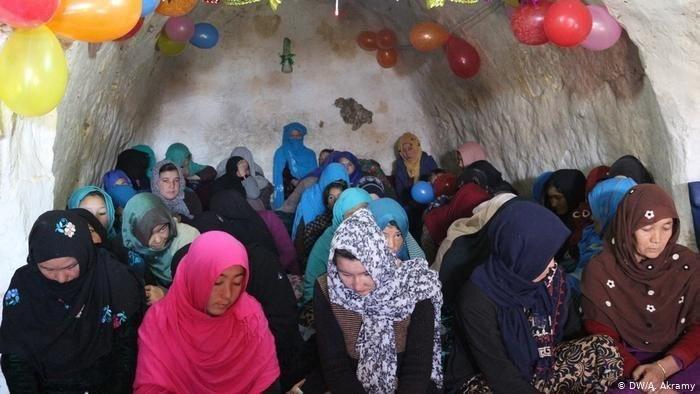 In a spring day of 2018, Bamyan cave dwellers – sheltering in dark grottos date to 1,500 years back—of Surkh Qol village received a destiny changing and enlightening message from Momeena Payman and Husnia Sakhizada, two female volunteers who were like two dandelions for the poor local residents. They proposed a literacy program for local women who immediately surrounded them with a deep enthusiasm expressing a strong interest to become literate.

Motivated by strong enthusiasm of the local women, the two volunteers started teaching literacy courses in two separate caves in mid-April 2018. The total number of participants of the courses soon raised to 60 students whose ages ranged from teenage girl to 55 years old women. The participants managed to learn how to read and write within three months and a half, a period which was unexpected for Momeena and Husnia.

In addition to literacy programs, Momeena and Husnia launched additional awareness sessions of empowerment for local women and it rapidly attracted attention of local officials in the central Bamyan province. Husnia and Momeena taught their students the basics of human rights, elections, and women rights, skills to live better, and environmental protection.

According to Ms. Momeena, they found their students very shy at the beginning of the programs but the shy girls and women were empowered to an extent that they moderated their graduation party. “They were not culpable because they were isolated from the mainstream society and the people didn’t maintain a good perspective towards them for they (the local women) were living in severe poverty and dwelling in caves. Even themselves had an embarrassing picture of their own,” Momeena recalls her then view of the locals’ status. She would always keep encouraging and motivating them to learn the required skills and work like other women outdoor.

After graduation from high school, Momeena, who is now 23 years old, comes up with the idea of offering literacy program for illiterate women and share it with her friend, Husnia. The two friends then share their plan with the men of the village and convince them to let their female family members to attend the literacy course. The women and girls who had remained deprived of learning opportunities refer for admission to the courses in large numbers at the extent which many of the enthusiastic applicants were not admitted for lack of admission capacity.

The volunteers would take a three hour walk to the caves and return home on daily basis. 60 students get graduated the third degree through the literacy program and are introduced to literacy program of Bamyan Education Department. Of those 60 women and girls, only 20 students get enrolled in schools and the remaining couldn’t continue their education for remoteness of their houses from schools, maternity affairs, and prohibition of their families.

“Most of them were women who had children and couldn’t walk the long way to the [nearest] school. They asked the government to be taught there [in the village] but the authorities did not meet their demands despite making promises,” said Husnia.

Momeena’s 10 membered family have left their home village in Waras district for Bamyan city around 14 years ago for education of their children, particularly girls. She has started advocacy and civil activism when studying the 9th grade at school. Momeena graduated from midwifery last year and worked as anchor with a local radio station during her undergraduate studies.

A strong incentive coupled with an in-depth understanding of the society’s need seems to have encouraged the volunteers to share a helping hand with those in need and share their knowledge. “We have to institutionalize volunteerism. How long we have to wait for the government or foreign organizations to assist us,” says Momeena who has used her skill to empower dozens of her fellow women living years in the caves of Bamyan.

Husnia is now a 26 year old woman who graduated from Teachers Education Faculty of Bamyan University around six years ago. She, however, is complaining about lack of education opportunities in her home district, Waras, adding that she is not able to continue her education for the bad economic situation. “We have come to the idea of offering literacy programs for I couldn’t continue my education due to poverty. Then I thought there are many women who wish to study but cannot do so for poverty. Then I decided to find the poorest women and teach them the reading and writing,” she says of her incentive for launching the literacy program.

Momeena and Husnia were appreciated for their humanitarian work as “role models and leaders” by the Afghanistan Independent Human Rights Commission (AIHRC) in a statement it issues every year on its anniversary of foundation.

The two volunteers say that they were motivated by the AIHRC’s statement of praise to resume their literacy programs after conducting a survey of those in need.