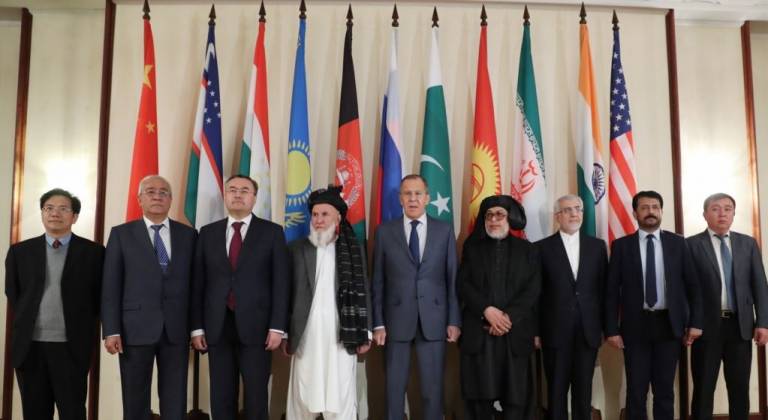 The Afghan peace process is a complex play derived from realities of a long-unresolved geopolitical conflict. The question whether the ongoing talks can yield an enduring peace remains in doubt as major agendas on the future government are still unclear.

Afghanistan will not turn backward, says the Afghan presidential palace ahead of a breakthrough in a peace deal that is expected to be signed in a couple of weeks. “They—the Taliban — are ready to part with war and violence and join a pluralistic society,” reads a statement that was issued by the presidential palace following a high level meeting between President Ashraf Ghani and a high level US diplomat in Kabul.

Afghan President Ashraf Ghani, accompanied by his acting defense minister Asadullah Khalid and other senior security officials, met with the US Secretary of State Mike Pompeo and US Secretary of Defense Mark Esper to discuss details about progress in peace settlement. Zalmay Khalilzad, a veteran US diplomat who is leading the US negotiating team in talks with the Taliban representatives, was also present in the meeting.

Last week, The Afghan government, led by Ashraf Ghani, announced that there had been a ‘significant progress’ in peace negotiations. “This is a welcoming development and I am pleased that our principal position on peace thus far has begun to yield fruitful results,” President Ashraf Ghani wrote in a tweet announcing his government is ready to embrace old foes to end the 18 years of bloody conflict which is fought on Afghan soil.

According to senior US officials, the deal to be signed in coming weeks is conditional. As part of trust building measure, the US will keep an eye on Taliban’s next movement. If the Taliban stick to their promises firmly, meaning if they reduce reduction in violence in certain areas they claim to have control over, the US will sign a deal, otherwise next options on the table will be picked up.

“Let the Taliban say anything they want to but they have to cut ties with al-Qaeda and terrorist networks and they have to say farewell to arm,” says US Secretary of State as quoted by a statement issued by the Afghan government. “We will stand with the Afghan security forces as we did in the past,” Pompeo said, according to the statement.

If the two sides come to terms, the US will gradually begin withdrawal of nearly 13,000 American forces from Afghanistan, and in return, the Taliban will agree to a comprehensive ceasefire, and begin a direct peace negotiations with the Afghan government to discuss the future of the country. The Afghan officials have said peace progress will not undermine the Afghan security intuitions, assuring that any peace deal to be signed will be made to serve the interest of the people of Afghanistan.

If things move as smoothly as they look now, the Taliban representatives will sit down with Afghan politicians and leaders around a peace table known as intra-Afghan peace dialogue. But skepticism remains high as key issues and major peace agendas are missing from future intra-Afghan talks.

Afghanistan is facing major challenges when it comes to principal of state building and future government structures. The Taliban representatives, who are leading peace talks with the US diplomats, intentionally decline to comment on group’s approach towards Afghanistan Constitution. Senior Afghan officials say there is national consensus on peace talks but they refuse to comment on future of Afghanistan Constitution in the aftermath of a peace deal. What has been agreed on principal positions of the Afghan government and the Taliban demands, however, remains unclear.

The Taliban commanders and fighters have a long-record of uncompromising opposition to democracy, calling it a Western invention created to colonize Muslims. Taliban peace negotiators, though earlier in Doha had stated that they would support women rights, they have shown little aptitude to support women in the areas under their control.

Differences will be easy to settle if the Taliban recognize the Afghan constitution as the guideline for a future government; but things will worsen if the group refuse to recognize its key principles.