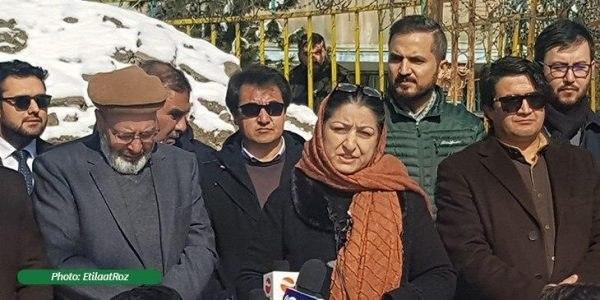 Afghan journalists are protesting against government restrictions on access to information in Kabul, February 04.
Asad Kosha·February 4, 2020

Afghan media protest against restriction on access to information

“Afghanistan has gone backwards when it comes to access to information in recent years. We are deeply concerned about the deterioration of access to government-related information in Afghanistan,” reads the statement which has been signed by 30 media organizations.

Following the fall of the Taliban in 2001, most Afghan media organizations were founded by veteran and young Afghan journalists. Afghan journalists, who have covered Afghanistan in the last 18 years, say Afghan media are now facing a hard time. The journalist community is working under climate of fear—severe restrictions, insecurity, and financial pressure. The Afghan government ostentatiously shows off to support free press in the country although majority of government organizations are reluctant to allow journalists to keep an eye on domestic development and other activities in government organizations.

“Despite the fact that Afghanistan is one of the deadliest places to be a journalist, Afghan media is still the freest in the region. But the carelessness of the government has endangered this hard- won achievement,” the statement issued by Afghan media says.

The incumbent Afghan president, Mohammad Ashraf Ghani, signed access to information law, months after he took office in 2014, with an aim to bring more accountability and transparency in government organization.

The law, however, was not put into effect as high-ranking Afghan officials excused to allow Afghan journalists to have access to information.

Over last six years, key Afghan ministries were run by caretaker ministers who have been close allies of the national unity government leaders—President Ghani and Chief Executive Abdullah. Those caretaker ministers in power were mostly accountable to their bosses, not to the Afghan people and MPs. In this obviously chaotic situation, the Afghan government has maintained a turbulent relationship with free press—in particular when it comes to corruption scandals of high-profile government officials.

The European Union nations, that have been a major supporter of the Afghan government, press and democracy, has expressed full support for free flow of information, calling it crucial for Afghan democracy.

United Nations Assistance Mission in Afghanistan (UNAMA) has also urged the Afghan government to promote access to information, saying that it will help the country to effectively fight corruption and bring accountability.

The Afghan journalists have come a long and yet bumpy way to cover a country, which has been the deadliest for reporters. They have paid a huge human cost to keep Afghan voices expressed. In a country where authoritarian leaders and corrupt government officials are trying to act on their own, free journalism is the only resort to promote fight against corruption, bring accountability in government and non-government organizations, and consolidate rule of law.