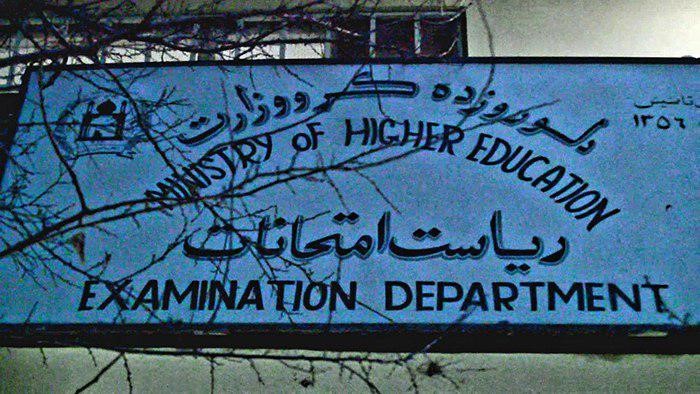 Inside bureaucratic game; can anybody manipulate Kankor result?

Though Afghanistan has come a long way in education sector, the quality of education is decaying in the country as the entire education system is facing corruption and misappropriation. It seems that the entire government is responsible for the poor state of affairs in education sector. Kabul Now has obtained government documents suggesting Kankor exam, university entrance test, which is designed to be competitive and fair is being manipulated by those in power.

Documents show that 73 members of Kankor exam board, contrary to rule and regulation, have maintained their positions as member of the board for two to four years between 1394-1398 (solar year). As many as 31 staffs have been hired by the NED though they have failed to pass civil service test taken by the Independent Administrative Reform and Civil Service Commission in 1397.

Abdul Qadeer Khamosh, the acting head of NED, says that under the decision taken by complaint committee and under directive of the NED, changes have been brought in results of tens of candidates. He claims some members of Kankor board, from previous years, have continued to work with the NED as they were needed to work for the National Examination Department.

Under a decree issued by President Ashraf Ghani on August 13, 2018, the National Examination Department, was founded as an independent office of exam. Prior to president’s decree, this office was functioning under the leadership of the Ministry of Higher Education. Under new mandate, the NED was tasked to look after Kankor exams affairs, announce Kankor results, and take test from applicants applying for low ranking positions of civil service.

Mr. Khamosh, who now chairs the NED, joined the Ministry of Higher Education in 1394. He was appointed as head of Kankor board, a board tasked to run the National Examination Department, which was then headed by Ahmad Jawed Rasulli.

The Afghan Kankor exam was computerized by a group of Korean experts in 1388.

Documents show that Kankor results of 28 candidates, who participated to take Kankor exam in 1394-1395, have been manipulated by unknown people. The documents suggest that these candidates, who had failed to pass the Kankor exam, were promoted by the NED, to enter at universities and study engineering and medical science. The NED has also arbitrarily changed study subjects of 20 other candidates.

Article no 40 of Kankor rule says: “no one or authority can change final Kankor results under any circumstance.”

Article no 18 of Kankor rule clearly states that exam board cannot change subject of study of an applicant after the examination is cleared.

Contrary to Kankor rule, the NED has manipulated Kankor results, a clear violation of article no 18 and 40 of Kankor rule.

The NED, then chaired by Ahmad Jawed Rasulli, in contrast to regulations of Kankor exam, manipulated Kankor results and changed study subject of some candidates.

An applicant confirmed that he used his connection—an MP—to get his Kankor result changed. For instance, Mohammad Naqeb son of Hamidullah, a local from Balkh province, acquired 142.40 marks and declared unqualified in first exam but in second result he acquired 289.500 marks, qualifying to study engineering at Balkh University.

Abdul Tawab son of Jalil Ahmad, a local from Herat, acquired 140.85 marks and declared unqualified in first result while in second exam he acquired 218.236 marks, qualifying to study agriculture engineering.

Manipulation of Kankor results in 1397

Result manipulation of Kankor candidates in 1395-1396

Findings indicate that the National Examination Department has illegally transferred a number of students from a department to another department and from a province to another province. Documents show that as many as 54 candidates were declared qualified to study social sciences but in second result sent to universities, they were promoted to study their dream subjects.

Mr. Khamosh, however, told Kabul Now that ‘changes in Kankor results’ have been brought followed by assessment of complaints by the complaint committee. He noted that those candidates who had failed to select their subject code correctly were given a chance following assessment of their complaints. He underlined that manipulation of Kankor results, though still takes place, has been minimized as compared to previous years. Khamosh says that candidates can file their complaints within three due weeks after Kankor result is announced.

But Kabul Now’s finding shows that three of the candidates, mentioned above, have failed. For more information you can see Kankor database of 1397.

Mr. Khairullah told Kabul Now that he had failed to acquire required marks in Kankor exam but weeks after the commencement of studies, IT officer of Ghor University contacted him, saying that he was declared qualified to study physics at the university. He is currently a second year student at Ghor University.

“After the end of first semester, authorities of the university told us that you were not declared qualified to study and after the end of our studies, the university would not award us any diploma; we left university and went to our homes, after a while they contacted us and asked us to comeback and attend the second semester,” he told Kabul Now.

Why Mansur’s complaint was not addressed?

Mansur, a Kankor candidate, who attended Kankor exam in 1397, claims that his Kankor result is missing. He says that he has submitted complaint letters to several government offices but in vain.

Mansur son of Abdul Azim, resident of Kabul, who graduated as first position holder from Abdul Ghafor Nadeem high school, attended Kankor exam in 1397, but his name did not appear in result sheet of Kankor exam in 1398.

In October 2019, Mansur filed a formal complaint letter to complaint commission of Afghan parliament. Authorities at exam board of the National Examination Department, responding to the complaint, said that his result did not appear on the final list of Kankor results due to technical error but promised that it would be cleared within a week.

Weeks later as Mansur followed up his complaint, he found that he had acquired 58.714 marks in a result, with ID number L01050260. Unsatisfied of his marks in final Kankor result, Mansur again filed a complaint letter to the exam board of the NED. Officials at the NED highlighted that the ID number on result sheet belonged to a person named Forogh.

Mansur claims that the ID number written on his result sheet was fake. He again checked with the NED authorities but this time the authorities gave him another ID number with serial number L01050256 in which he was given 78.714 marks, and was declared failed.

In response to official letter issued by the Ministry of State on Parliamentary Affairs, the National Examination Department notes: Mansur, with ID number L01050256, has acquired 78.714 marks and he has failed.

Mr. Khamosh says, Mansur, under anxiety, has ticked two times for each question and therefore he has acquired 78.714 marks. Mr. Khamosh claims that Mansur’s father has said that he would withdraw his complaint if he—Khamosh—declares his son qualified to study a good subject. “I did not accept it,” he says.

The question how Mansur, despite ticking each question two times, has acquired 78 marks in Kankor exam remains anonymous. Mr. Khamosh, however, says Kankor system is working perfectly and there is no error in part of the system.

Though Article no 19 of examination rule says that each Kankor taker have three chances to clear the test, documents suggest that a number of candidates have taken multiple Kankor exams in 1390.

Violation of Kankor rule and regulation

According to Article no 14 of examination rule, member of exam board shall jointly be selected by the Ministry of Higher Education, National Examination Department and Kabul University. As per regulation, the exam board of Kankor comprises of ten members: the head of NED, the secretariat of NED, representative of the Ministry of Education and seven other members who come from Kabul University or central universities.

Documents suggest that 73 individuals who have served as members of Kankor exam board in different periods of time have worked with the NED even after the expiration of their mandate. Contrary to regulation, some member of the Kankor exam board have been chosen from provincial universities.

Against membership rule of Kankor exam board, ten people have served as member of the board for four years, 11 people for three years, and 14 people for two years.

Sources from the National Examination Department told Kabul Now that most of them could have maintained their membership for years as they have friendly relationship with Jawed Rasulli and Mr. Khamosh.

The acting head of the NED, however, says that these members have been working with the NED as their expertise are required.

Ethnic composition of the Kankor exam board

Sources tell Kabul Now that efforts are underway at the NED to choose members of Kankor exam board from a selected ethnic group. Sources claim that Abdul Qadeer Khamosh and Jawed Rasulli were behind the move, a claim that needs to be investigated.

In the last four years, most members of the Kankor exam board, however, were ethnic Pashtuns. Of the 105 members, 67 were Pashtuns.

Mr. Khamosh, however, justifies that some members of the board, who are identified as Pashtun, are originally Tajik.

Documents show that the National Examination Department has recently hired 31 employees contrary to employment requirements and national civil service regulations. Though they have not cleared civil service test, the NED has hired them.

Education which a key sector is crammed with corruption. Experts criticize government authorities for biased and selective approach on country’s education system, wrong policies and misappropriation of education fund.