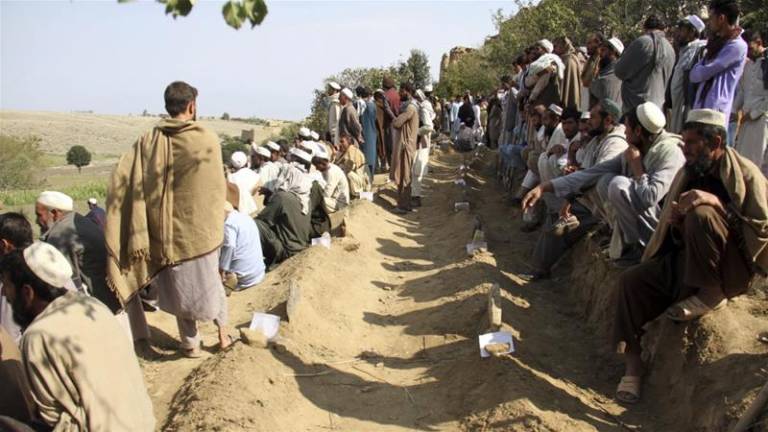 Why does Nangarhar come under frequent attacks?

The eastern Nangarhar province known as evergreen province for its pleasant weather and being conducive for various crops frequently came under deadly explosions and suicide bombings. In the latest series of bloody bombings, a massive blast tore through a mosque at the time of Friday prayer on October 18, reportedly killing nearly 70 and wounding more than 32 others.

Mubarez Atal, Spokesperson for Nangarhar police chief, told Kabul Now the type of the blast has not been discovered yet and a probe is underway to identify the perpetrators.

Describing the attack as a ‘war crime’ and inhumane, Afghanistan Independent Human Rights Commission (AIHRC), however, said it was planted bombs that went off inside the mosque.

Having condemned the attack, President Ghani indirectly blamed Taliban arguing the militant group either conduct these terrorist attacks or provided ground for the other groups like the Islamic State to carry out such attack.

The president visited Haskamina district today, October 20, to pay tribute to the victims of the mosque bombing and shared condolences with the families of the victims.

The Taliban, however, condemned the attack. The group denied responsibility for the attack in a statement.

Sediq Seddiqi, spokesperson for President Ghani, wrote on his twitter account that the government has dispatched a team to the province to provide aid for the families of the victims and those who were wounded in the attack.

The AIHRC has urged the warring parties to respect international humanitarian laws, and asked the security and justice institutions to launch a probe on the incident and bring the perpetrators to justice.

Issuing a statement, the Senate called on the government to declare today, Sunday, October 20, as a national mourning day.

UN Secretary General António Guterres also condemned the attack and noted that those responsible must be held accountable.

“Killing worshippers assembled together in peace is unconscionable. All Afghans have the right to live and worship together in safety,” US Ambassador to Afghanistan, John R. Bass said in a tweet.

NATO mission in Afghanistan reiterates that they will stand with the Afghan defense and security forces to fight against the international terrorism.

Why Nangarhar is under attacks?

In addition to the Taliban, the Islamic State – Khurasan Province (ISKP) are actively present in the province since 2014. Although Afghan forces and their international allies have launched many operations to suppress the ISKP affiliated terrorists but they have reportedly created new bases in recent months.

As stated by the governor spokesperson, Atal, massive military offensives have been conducted in Achin district of the province and the terrorists suffered heavy casualties. According to him, 10 ISKP members were killed, three bases, eight outposts, two tunnels, and a hideout of the terrorists were destroyed in a recent offensive.

He, however, stated that Haskamina, where the mosque attack happened, is under the control of the government forces.

Atiqullah Amarkhil, a military commentator, argued that the militant groups launched attacks on Nangarhar because it was a key province adjacent to the capital Kabul. “The Taliban entered Kabul through Nangarhar and Mujahideen also launched their first attack on Nangarhar,” he added, noting that Nangarhar is regarded as Kabul gateway.

“An insecure Nangarhar is in the interest of Pakistan,” Amarkhil said. He noted that if the province becomes secure the water streaming through it to Pakistan would be stopped.

In addition to Pakistan’s role in insecurity, some local officials say there are no sufficient force to defend the city.

MP Abdul Rauf Shpoon, who says the estimated population of the province touches nearly five million, argued that the security measures in the province are not taken on the basis estimated number of population.

Blaming Pakistan for such attacks, he warned that if the country continues to spread violence in Afghanistan, it will ultimately harm Pakistan as well.

The attack comes while the United Nations Assistance Mission in Afghanistan (UNAMA) said in a report on October 17 that overall, in the first nine months of 2019, it has documented 8,239 civilians’ casualties (2,563 killed and 5,676 injured).