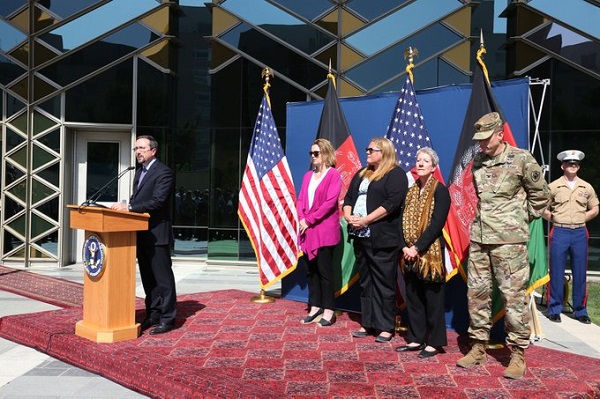 US Embassy disturbed by complaints over Afghan presidential vote

The US Embassy in Kabul has expressed deep concern over safety and security of the due presidential vote. In a tweet, posted on Monday, 23 September, the US diplomatic mission in Afghanistan said, “We urge all candidates to adhere to the Independent Election Commission (IEC) Code of Conduct and respect Afghanistan’s democratic process.” As the embassy claimed, the election should be reliable for the people of Afghanistan.

The US Embassy says that they are concerned about complaints raised on security, lack of an equal playing field, and frauds in the coming election. The US diplomatic mission requested all candidates to adhere to code of conducts of the IEC and respect election process.

This came while recently a number of presidential nominees voiced concerns over lack of equal playing field and insecurity. These candidates complained that the security forces have selective approach when it comes to ensure security of the candidates.

A number of candidates accused Mohammad Ashraf Ghani and Abdullah Abdullah of using state-owned facilities in election campaigns while several candidates, who are running for 2019 presidential elections, have asked the IEC to put off the elections—stressing that they need equal opportunity and equal playing field.