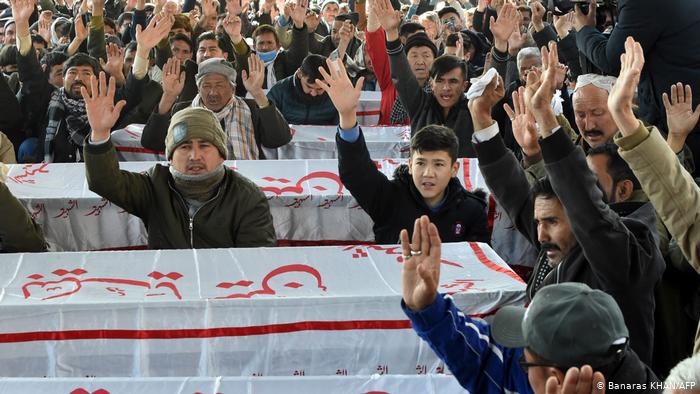 Fear of death; Pakistan’s Hazaras protest against killing of miners

Hundreds of Hazaras have been protesting since last Sunday in reaction to the brutal killing of 10 coal miners who were first kidnapped and then shot dead by unknown gunmen in Mach, an area located about 50km east of Balochistan’s capital Quetta. The protesters refuse to bury dead bodies of the victims, demanding the Pakistani government and security agencies to bring the perpetrators to justice.

On Monday, January 04, a number of Hazaras gathered in western part of Quetta and blocked the Western Bypass, a highway that connects the city to other major cities of Pakistan. The protesters say they would continue to sit in until and unless Pakistani law and security agencies do not meet their demand, and Imran Khan, the Pakistani prime minister, does not pay a visit to the protest site. A day earlier on January 03, unknown armed men stormed at residential quarters of coal miners in coal-rich area of Mach, took several coal miners to the nearby mountains, and opened fires at them, killing 10 of them.

Seven of those killed are Afghan nationals, says the Afghan ministry of foreign affairs.

The Islamic State (IS) militants claimed responsibility for the attack.

An estimated 500,000 Hazaras live in two guarded enclaves in Quetta, Hazara Town in west and Alamdar Road in eastern part of the city. Over last years, the ethnic Hazaras, who are mostly Shia Muslims, were persecuted by militant groups such as Lashkar-e-Jhangvi and Lashkar-e-Tayyiba, the two notorious militant groups operating in Pakistan.

Pakistan’s Prime Minister Imran Khan said in a tweet that the killing of coal miners is cowardly inhuman act of terrorism.

Balochistan, stretching from the Arabian Sea to Iran in the west and Afghanistan in the north, is Pakistan’s largest province. The conflict in Balochistan, however, is complex. Many nationalist Baloch leaders see the Pakistani state as an oppressing apparatus in the hands of Punjabi generals and statesmen who, as they claim, extract Balochistan’s resources but in return refuse to give equal share to Baloch nationals. Baloch insurgent forces, known as Balochistan Liberation Army, Balochistan Liberation Front and Lashkar-e-Balochistan, are banned by the Pakistani state. The Pakistani intelligence agencies claim that Baloch insurgents, who are fighting for separation, are funded and armed by Pakistan’s arch-enemy India via Afghanistan’s spy agency, National Directorate of Security.

Baloch insurgents have been fighting against Pakistani forces, especially the Pakistan’s Frontier Corps (FC), a wing of military, in Balochistan. In December last year, the militant Baloch killed seven Pakistan forces in Harnai area of Balochistan. Pakistan’s Prime Minster Imran Khan condemned the attack on FC forces, calling it an act of terrorism.

In past years, hundreds of Hazaras were targeted by militant groups. Targeted killings of Hazaras in Quetta had significantly declined in past years. Sunday’s terrorist attack on Hazara coal miners is grim reminder that the Hazaras are at risk of persecution in Pakistan.

Growing attacks, claimed by IS in Pakistan, are connected to failed double-standard strategy of Pakistan. The Pakistani state, namely the Pakistani military establishment, resorts to Islamic militant extremism as a dedicated force to fight Pakistan’s proxy war against the dominating India in Kashmir and elsewhere. Some elements in Pakistani military keep harboring militant extremist groups including the Taliban fighters and leaders to fight their over deluded war in the region while a growing rise of sectarian violence threatens the country’s security.