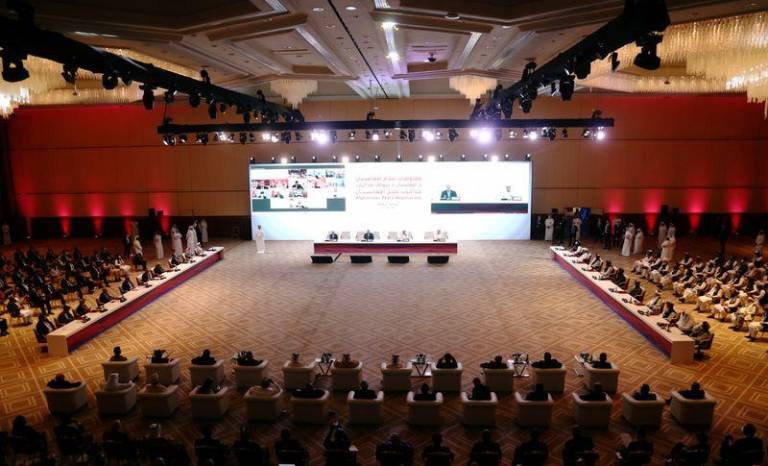 Is a third party mediation needed in intra-Afghan negotiations?

The intra-Afghan negotiations started on September 12, in the Qatari capital Doha but the two sides— a government –led Afghan peace delegation and Taliban negotiators— have become bogged down in setting procedure and principles for a substantive talks, with the Taliban insisting on referring to Hanafi jurisprudence and US-Taliban peace agreement as only conflict resolution mechanism in substantive talks while the Afghan side refuse to agree with Taliban condition and at the same time insist upon the group to agree to ceasefire.

The Taliban argue that under US-Taliban peace deal, they have come to peace table and the talks must proceed in accordance with the agreement signed between the US government and the Taliban.

The government, however, conditions acceptance of the US-Taliban agreement to recognition of a joint Afghanistan-US declaration and to decisions made by peace consultative loya Jirga, which voted for release of 400 Taliban notorious prisoners, as additional referral sources for negotiations. The joint declaration was issued in Kabul on the same day when the US-Taliban was signed, February 29, in presence of US Secretary of Defense and NATO SG Jens Stoltenberg and the loya Jirga was convened earlier in August. Another alternative suggested by the government negotiation team is Quran and Sunnah. The Taliban, however, have rejected all the two suggestions.

Taliban reject Quran and Sunnah as “repeated and pointless” suggestions

Spokesperson for the Taliban political office and a member of the group’s negotiation team, Mohammad Naeem Wardak, meanwhile, rejects proposals of the government negotiating team as “senseless”, noting that suggesting Quran and Sunnah as a foundation or referral base is repeated. “Quran and Sunnah is pointless [suggestion]” he said. According to him, the two sides have already agreed in principles that nothing will be on negotiations agenda which is against Islam and the country’s national interests. “Quran and Sunnah is included in an article of the [negotiations] procedure, therefore, it makes no sense to raise it again.”

Is there a need for third party mediation?

The last meeting between contact groups of the two sides ended in vain on October 19. But the two sides have stressed that they will continue meetings for resolving the disputed issues. “Today evening, a few members of the contact group of IRoA negotiation team and the other side held a meeting and discussed the disputed issues. The meetings will continue to be able to resolve the issues,” Peace Negotiation of the I.R. of Afghanistan said in a tweet.

Some political commentators are of opinion that the road ahead of intra-Afghan negotiations is very bumpy and it will be facing so many complex challenges.

Omar Samad, senior political analyst at the Atlantic Council and a former Afghan ambassador to Belgium, says that challenges and even stalemates are expected for the talks. “It would be wise if a neutral group would be made to be there as an observer from the very beginning who would be used for consultation. However, it is not too late to consider such a group,” he explained.

Orzala Nemat, director of Afghanistan research and evaluation unit says “peace process in Afghanistan is complicated and it has national, regional, and global dimensions. Therefore a third and neutral party is needed to work together and act as a mediator between both sides.”

In an interview with Kabul Now, Dr. Mahiuddin Mehdi, an author, says that without a third party, it is not possible to find and agree on a solution. “There is a mediator in the negotiation teams right now, otherwise the peace talks would never get started,” he added.

Sources in the Afghan negotiating team have already confirmed to BBC that as the dispute escalated, some countries supporting the Afghan peace process had started efforts to resolve the “dispute between Taliban and the government.”  However, in the early days, the Taliban said that there is no need for mediation because the two sides had agreed at the beginning that there will be no need for mediation of the third party and they can resolve their differences.

Omar Samad says that in the current situation, a new formula is needed to be used for a breakthrough. According to Samad a team of Afghan mediators or multi-national mediation team with support of international community or an internationally accredited mediation team supported by the United Nations Security Council can help the Afghan talks move forward.

Ms. Nemat believes that mediation in the current peace process can play two major roles. On the one hand, it helps to accelerate the peace process and on the other hand, it guarantees the accountability and commitment of both parties.

Negotiations in Qatar is on halt while violence and bloodshed have increased in the country. It has been more than a week that conflict in Helmand has started as a result of which hundreds of families have been displaced. Few days ago, a deadly explosion occurred in the central province of Ghor, where more than 15 people were killed and tens of others were wounded.

“Mediation can create an operational mechanism that can help the transparency of the process. It can bring both sides together and commit them to a ceasefire,” said Ms. Nemat.