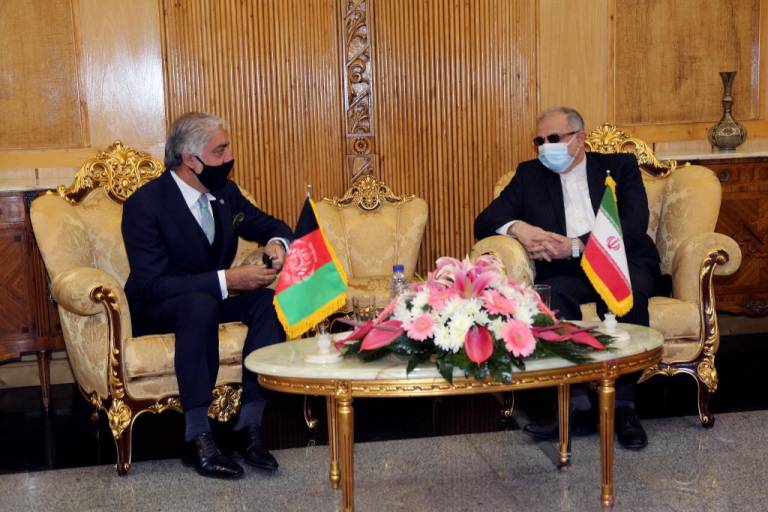 We are ready to negotiate but Taliban have not agreed, Abdullah says on Tehran visit

Abdullah Abdullah, chairperson of the High Council for National Reconciliation, met with Javad Zarif, the Iranian foreign minter, on Sunday, October 18, in Tehran, the capital of Iran. Mr. Abdullah, discussed Afghan peace process with Foreign Minister Javad Zarif, who as Iranian media report, reaffirmed the support of the Islamic Republic of Iran for the government of the Islamic Republic of Afghanistan.

Abdullah’s Tehran visit came after he traveled to Islamabad and New Delhi to seek a regional consensus on Afghan peace process which is underway in Doha.

Iran’s role in Afghan peace is crucial and Tehran can play a good role in bring a lasting peace in Afghanistan.

The Iranian foreign ministry has said that Tehran has always desired peace and stability for Afghanistan and want to see it as a prosperous, independent, and developed country.

Arrived in #Tehran I.R. of #Iran to begin a two days official visit. During my stay I will meet the Iranian leadership & exchange views on Afghanistan Peace and all other relevant bilateral issues to promote long-term cooperation & friendship. pic.twitter.com/IpLlxAM293

The chairperson of Afghan High Council for National Reconciliation, told Press TV late on Sunday night that Iran has assisted some development projects in Afghanistan. “Relations and investments have been established between the private sectors of the two countries, and Iranian private companies’ activities continue inside Afghanistan.”

“The Afghan government is ready to negotiate but the Taliban have not yet agreed. [We want to see] progress in reduction in violence,” Abdullah said during his visit to Tehran.